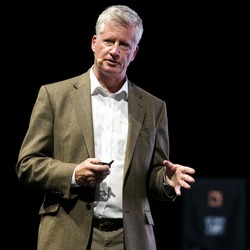 Calum Chace, author of The Economic Singularity Calum is a sought-after keynote speaker and best-selling writer on artificial intelligence. He focuses on the medium- and long-term impact of AI on all of us, our societies and our economies.

His non-fiction books on AI are Surviving AI, about strong AI and superintelligence, and The Economic Singularity, about the prospect of widespread technological unemployment. Both are now in their third editions.

He also wrote Pandora's Brain and Pandora’s Oracle, a pair of techno-thrillers about the first superintelligence. He is a regular contributor to magazines, newspapers, and radio.

In the last five years, Calum has given over 120 talks in 18 countries on five continents. Videos of his talks, and lots of other materials are available at www.pandoras-brain.com.

He is co-founder of a think tank focused on the future of jobs, called the Economic Singularity Foundation. The Foundation has published Stories from 2045, a collection of short stories written by its members.

Before becoming a full-time writer and speaker, Calum had a 30-year career in journalism and in business, as a marketer, a strategy consultant and a CEO. He studied philosophy at Oxford University, which confirmed his suspicion that science fiction is actually philosophy in fancy dress.

Calum Chace and many more register for the Procurement Summit now!