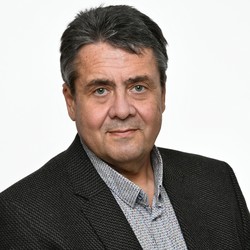 Sigmar Gabriel was Germany’s Minister for Foreign Affairs from 2017 to 2018.

Born in Goslar in 1959, Sigmar Gabriel studied politics, sociology and German at the University of Göttingen. In 1987 he passed the second state examination as a grammar school teacher and worked as a teacher in adult vocational training until 1990.

In 1977 Sigmar Gabriel has become a member of the Social Democratic Party of Germany and was its chairman from 2009 to 2017.

After several different positions within his party in Lower Saxony, Gabriel was Prime Minister of the State of Lower Saxony from 1999 to 2003. From 2005 to 2009 he was Federal Minister of the Environment and from 2013 to 2017 Sigmar Gabriel was Federal Minister for Economic Affairs and Energy. He was Vice Chancellor of Germany from 2013 to 2018 and Germany’s Minister for Foreign Affairs from 2017 to 2018.

Sigmar Gabriel is chairman of the Atlantik-Brücke e.V., member of the Trilateral Commission and the European Council of Foreign Relations. He is also a member of the board of trustees of the International Crisis Group and the Deloitte advisory board. Since June 2018 he is author for Holtzbrinck-Verlag. Sigmar Gabriel teaches at the University of Bonn and spent a research period at Harvard University in autumn 2018.

Sigmar Gabriel is a brilliant and convincing speaker who outlines his point of view frankly and straight and therewith captivates his audience.

Sigmar Gabriel and many more register for the Procurement Summit now!